Say it with a scent – a brief history
of fragrant cinema

Attempts at accompanying film screenings with scents were made already ten years after the birth of cinema when Samuel Roxy Rothafel treated his audience with an air of rose water, spread throughout the theatre using an ordinary table fan.

In the years around 1930 further fragrant experiments were carried out as a handful of cinema theatres on Broadway tried to fabricate clouds of perfume right from the ceilings of the auditoriums. Vast volumes of perfume were required to fill the entire space but no system was in place to even out the emissions. This resulted in some visitors more or less choking on the strong odour while others went complaining to the theatre director since they hadn’t gotten the slightest whiff. Moreover, the overuse of aromatic materials led to contamination of the auditorium – they just couldn’t get the smell out after the screening concluded. This effectively sabotaged the experience for other moviegoers that had no interest at all in these essential events.

Walt Disney toyed around in 1938 with the idea of using scents in the experimental (and wonderful) work Fantasia but abandoned these plans since it turned out too expensive.

The concept of aromatised movies then fell out of fashion for 20 years, even though some eccentric experiments were done during this time.

The first feature film that used scent as an integral part of the plot used the system Smell-O-Vision developed by the Swiss-born Hans Laube since 1939. Although there had been some patent-related problems along the way, a rather complete and working Smell-O-Vision arrangement could finally enrich the premiere of Scent of Mystery (Jack Cardiff, 1960). The movie was an utter disaster and both critics and audiences panned it without mercy.

Other than a weak story Scent of Mystery also suffered, to no one’s surprise, from a poorly working scent system. Capsules beneath the seats were supposed to emit various aromas in synchronisation with the film strip but made a noticeable venting sound each time they were activated, to the annoyance of the audience. Also, the fragrances reached different viewers at different times so what was supposed to occur in time with the movie instead happened several seconds delayed for those in the back of the theatre. To adjust for this delay many members of the audience tried sniffing extra-hard to catch the faint scents, making noises that annoyed the entire group even more.

It should also be added that the cost to fit a theatre with Smell-O-Vision was in the millions which was yet another reason for the technology to quickly become obsolete. Scent of Mystery was not only the first feature film to use it but also the last. With this, the second dormancy of fragrant cinema commenced.

20 years later, in a tribute to the scented films of earlier times, John Waters heightened his film Polyester (John Waters, 1981) with the self-invented concept Odorama. This was a scratch card handed out before the screening, with ten numbered fields that when scratched would emit various scents. During the movie a number was occasionally displayed in the corner of the picture, signalling the audience to scratch the corresponding number on their card. The problem with this approach was that the scents got mixed up over time, which also has to do with the human nose and its inability to adapt quickly enough to discern different strong scents in succession. After a while, the audience just had to get used to a vague but repugnant mix of flowers, pizza, glue, freshly cut grass, and excrement. It need not be said that the 1980s too failed to initiate a renaissance for fragrant cinema. 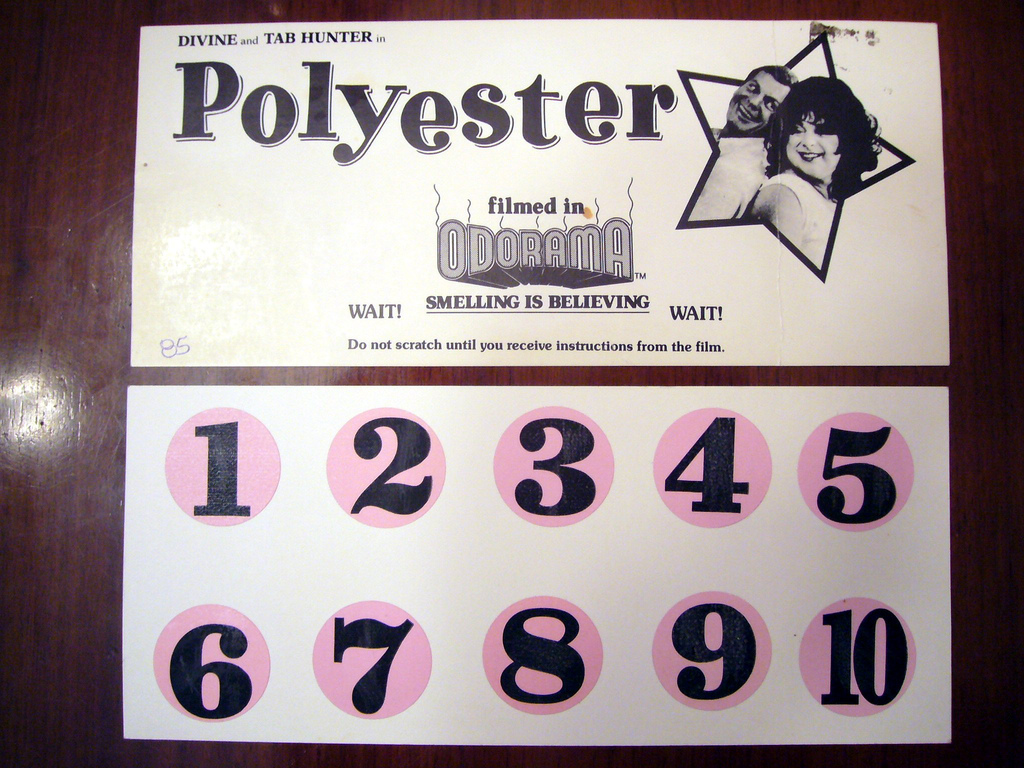 Movies as a bodily experience were strangely absent from analyses in cinema studies for a long time. But thanks to excellent work by scholars like Linda Williams (writing extensively on the “body genres” of horror, melodrama, and pornography) and Vivian Sobchack (for example in her book Carnal Thoughts) this changed over time and is a definitive part of the discourse today. But maybe this is the reason why fragrant cinema has been treated with such distrust and even contempt in traditional film literature. Sharon Monteith and co-authors in the chapter on spectacle cinema in their book Film Histories is an example:

Some features of the race for special cinematic effects bordered on the ludicrous. Even the names of the brands Smell-O-Vision and AromaRama now seem a clear sign that the idea of sensory cinema would never take off.

No further explanation is given as to why this development differs from how sound or colour in cinema was finally established. These technologies were also preceded by intense experimentation and major failures, mocked as fundamentally useless fads. A movie like The Jazz Singer (Alan Crosland, 1927) touting its Vitaphone system could be said to be equally “ludicrous” as Smell-O-Vision. Both system names were used in marketing because it raises eyebrows and promises spectacle. But while Smell-O-Vision ultimately failed, Vitaphone and sound in cinema, in general, were a huge success and changed the landscape permanently.

In the essay The End of Classical Exploitation (1999), Eric Schaefer calls Smell-O-Vision a “harebrained scheme” and mostly a way for theatres back then to differentiate themselves in a competition of gimmicky technologies. Notable though is that Schaefer mentions 3D cinema in the same sentence, a technology that has endured the same ridicule and that for a long time was considered a passing joke. But even after several failed attempts at popularising 3D cinema throughout the years, suddenly a film like Avatar (James Cameron, 2009) comes along – maybe because the time is just right – and succeeds where all others failed.

It’s easy to see the same thing at play with other technologies. For example, companies that sold clothes over the internet existed already in the boom days of the 1990s but many failed because most people considered this a fundamentally physical activity – you want to feel, and maybe most importantly, try on clothes. But at some point, the general population was conditioned enough to the thought, including all the upsides, that such ventures started succeeding even though the technology and process had hardly changed.

In summary, all new film technologies started out as clever tricks to then develop into something usable and valuable in the long term. You’ll sometimes see that initial novelty application stick around even after mainstream adoption. 3D cinema in the context of science museums often “shows off” the technology much more, maximising the number of objects flying at the audience, while in feature films it might (but not always) be used more as an enhancement. However, the idea that movies are either spectacle or substance isn’t even very useful in the first place.

All hope is not lost for fragrant cinema and some attempts were made in the past couple of decades. Rugrats Go Wild (Norton Virgien & John Eng, 2003) used the Odorama system (to Waters’ discontent) for some theatrical screenings and Spy Kids: All the Time in the World (Robert Rodriguez, 2011) also employed scratch cards, under the name Aroma-Scope. Even independent filmmakers have had a go. The Norwegian director Tommy Wirkola produced Kurt Josef Wagle og legenden om Fjordheksa in 2010, using Odorama, explaining in a press release:

The only scent you get in a theatre is usually the smell of popcorn from your neighbour. We’re gonna make use of the “unused sense” to create a more complete cinema experience. Just think about how good Scent of a Woman had been if it used Odorama!

Maybe one day scent will be the obvious fourth D in 4D. But for now, it’s just not essential.

Markus Amalthea Magnuson is a film writer and technologist from Stockholm, Sweden. He holds a BA and MA in Cinema Studies and wrote his master’s thesis on cyborgs and gender in film and television. He tweets at @scifiagenda.

« Back to Articles
This website uses cookies and by visiting you imply you’re cool with it, see the legal page for more info. Got it, hide this notice »